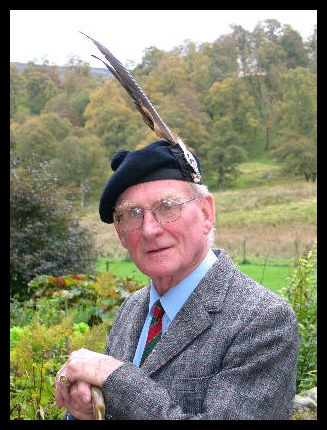 Our 27th Chief, Sir William Macpherson of Cluny and Blairgowrie – ‘Cluny’ to us all - died peacefully at home on the 14 February 2021, surrounded by his family.

We were fortunate to have had his guidance, support and leadership for an incredible 50 years and the world will have benefited from his 94 years on this earth.

His phrase “first amongst equals” doesn’t even start to mark the presence he had. Through his work in law (what better epitaph could someone wish for that the phrase used by an interviewer “He made Britain a better place for me to live”) to his leadership at the after-ceilidh-ceilidh he was a man who left his mark on those he met.

On the 18th of June 2019 he passed his 50th year as our Chief. He was educated at Summer Fields, Oxford; Wellington College, Berkshire; and Trinity College, Oxford. During the period 1944-1947, Sir William served in the Scots Guards, transferring to the 21st Special Air Service Regiment (Territorial Army) with whom he served until 1965. He has served as the Honorary Colonel of the 21st SAS since 1983.

In 1962 Sir William married Sheila McDonald Brodie. They have three children: Annie, the late Alan Thomas (younger of Cluny) and James Brodie (Tanistair of the House of Cluny-Macpherson). The family's home is Newton Castle, Blairgowrie, Perthshire. Blairgowrie has been the home of the Macphersons since 1787, when it was purchased by James "Ossian" Macpherson as the agent for Cluny's ancestor.